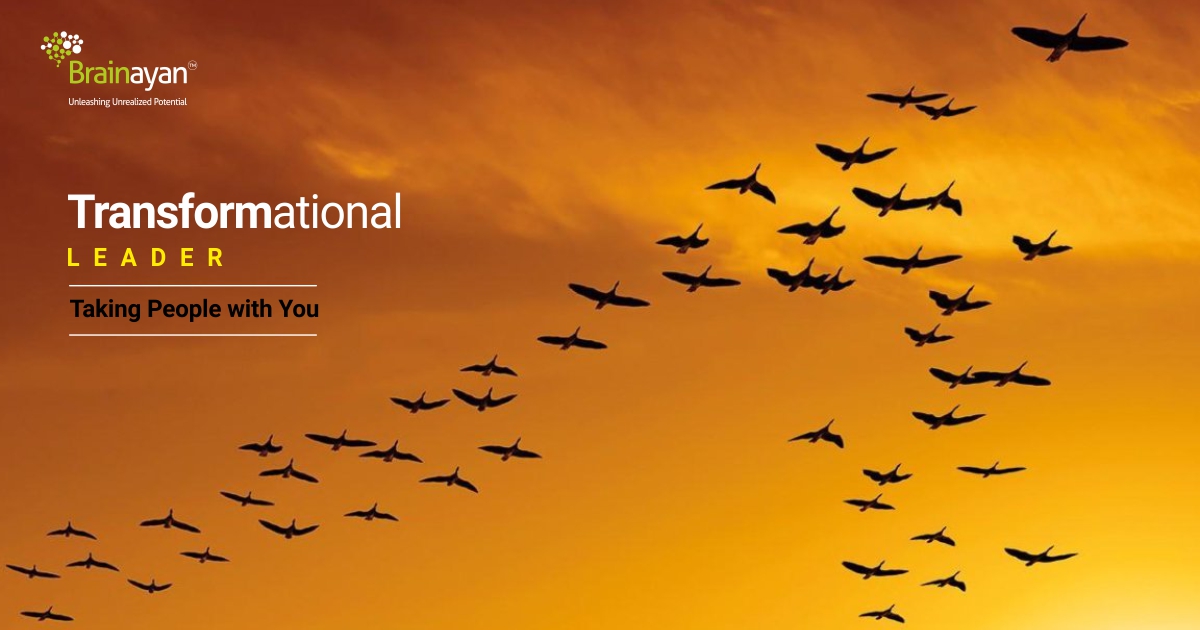 Transformative Leader: Taking People with You

Posted at h in Blog by

Change is imperative. The ability to adapt to new situations, embrace innovation and work ahead of the curve is an absolute necessity to survive and thrive today. A Transformational Leader envisions transformative change of a team or organization not only when the ecosystem asks for it, like in ‘the new normal’, but also for growth when things are ‘normal’. Having envisioned a change, the transformative leader then needs to take people along for manifesting the vision. The how-to follows.

How would you assuage threat perceptions triggered by change? A Transformational Leader knows what drives their people and what will help align them to the proposed change.

There are two types of people in an organization—the gatekeepers (also called protectors) and innovators. The gatekeepers are risk averse and motivated to protect the status quo. They need to be convinced that the change is less risky than the status quo. Communicate the rationale for change. Communicate frequently, clearly and through various platforms and forums where your employees gather—now online. Allow them opportunity to voice their concerns. Listen and let them know you’ve heard them. The innovators are primed for and energized by change. They are your champions of change. Their need is to be convinced that the new direction is the right future. Communicate your vision with them. Kindle their excitement and passion for this new future you see.

Use storytelling to take your people along.  Facts and logic are brainy. The heart is uninvolved. But when you need people to become champions and supporters of your vision and change, you have to contend with fear and elevate them to a place of passionate support. You need to involve the heart. Storytelling activates multiple centers of the brain at once, including those for image processing, as well as emotions. As Maya Angelou—novelist, poet and civil rights activist—says: “People won’t remember what you said or did; they will remember how you made them feel.” And you want your people to remember why your vision and the change involved are good! Your story telling can take the shape of an actual story that conveys what you have to say. A subtler way is to use storytelling techniques to trigger the same effect as stories. For example, using words that stimulate sensory centers of the brain or evoke feelings. The more often-used technique is to sprinkle stories of personal experience and anecdotes at appropriate points in your message to take it home. A Transformational Leader knows their people and knows how to move them to action.

Avon, a successful and profitable company since its inception in 1887 was witnessing a lag in sales by 1990s. The reason: the brand was viewed as a line of ‘cheap’ cosmetics that only grandmothers wore. Andrea Jung who joined Avon in 1994 set about changing this brand perception by replacing an older product line with a new one, a more expensive one. And she met with a huge resistance from local Avon salespersons who sold the products to friends and neighbors and were selling well. It was hard for them to believe replacing a reliable product with a new, expensive one was the answer to the company’s troubles. Market research data didn’t help in convincing them. Then, Jung asked the question that hit the message home. She asked if they wore Avon fragrances. Perspective shifted and the Avon salespersons came around to vision and accepted the need for change. Within 6 short years, Andrea Jung became Avon’s CEO, and Avon’s sales jumped from 5.3$ billion to nearly 8$ billion, the stock rose 164% with 5 consecutive years of double-digit growth.

Andrea’s foresight on what needed to change, her understanding of Avon’s business and salespersons helped her successfully overhaul what Avon stood for. Andrea’s Avon story is the story of a Transformative Leader taking an organization in a new direction successfully by taking people along with her vision.